The fiction of gender parity in local government leadership 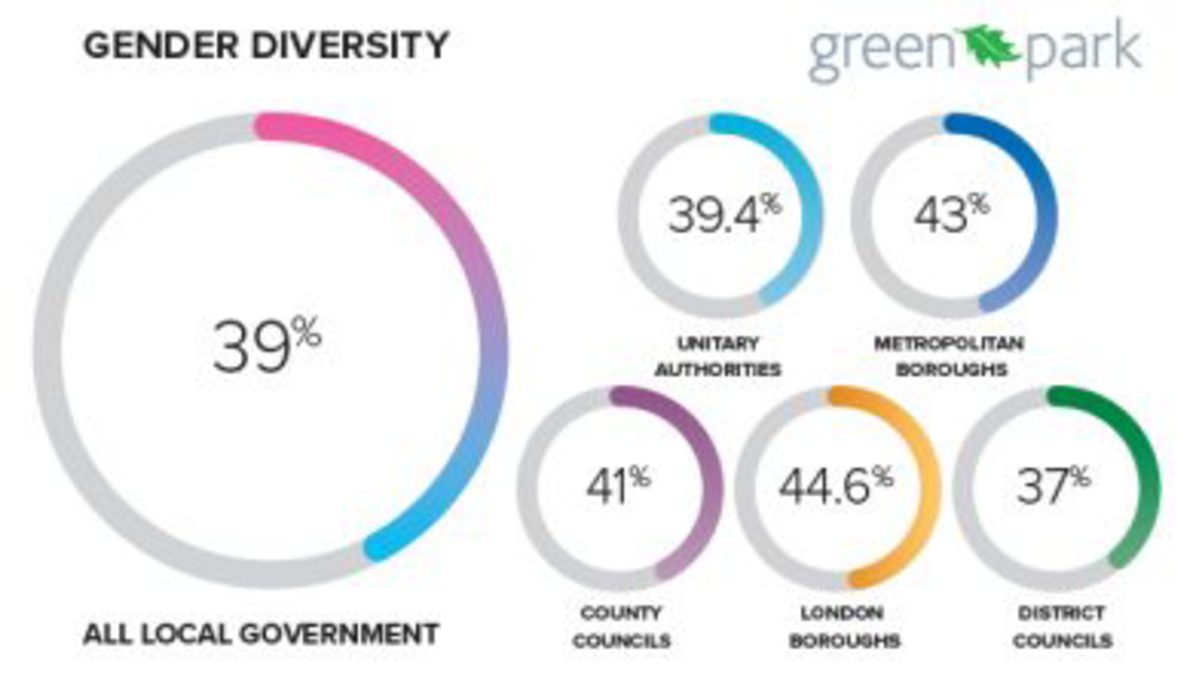 Green Park’s Leadership Local Government 2018 report reveals that women remain significantly underrepresented in senior managerial positions across Local Government. Combined analysis of all senior roles across Unitary Authorities, County Councils, Metropolitan Boroughs, London Boroughs and District Councils reveals the majority of senior positions are occupied by men, with just 39. per cent held by women. While women make up 51 per cent of working age population, this is not reflected in the upper echelons of Local Government leadership.

The report analyses gender representation in both Chief Executive and Chief Officer roles across Local Authorities. The report assesses diversity trends within senior leadership positions, enabling authorities to measure their progress in creating inclusive senior teams that better reflect their wider workforce and communities they serve.

Women hold less than a third (31.3 per cent) of the CEO roles across the London Boroughs and District Councils (30.3 per cent). Indeed, the number of female CEOs of London Boroughs has declined since 2017, when women held 34.4 per cent of the top positions. While at County Council level the figure is an improvement on 2017, up to 41 per cent from 37.3 per cent, it is no means representative when compared to female representation in the working population. The Public Sector Equality Duty, which placed an obligation on public authorities to positively promote equality, has been in place for over seven years yet women continue to appear discriminated against at the senior level when it comes to management appointments.

While Metropolitan Boroughs have the highest proportion of female CEOs, at a creditable 55.6 per cent, the number of female Chief Officers (in top twenty management positions) has decreased since 2017 (down from 45 per cent to 43 per cent). While the headline figure does appear positive, if the female talent pipeline in Local Authorities is being depleted there is a risk of this figure going into reverse in the future.

Table one:  Gender Analysis of Women in Local Government

Neil Lupin, Managing Partner, Green Park, commented: “We had hoped gender pay gap reporting would help drive greater equality amongst appointments to senior management across the public sector but this has yet to transpire. Local Authority leaders have a crucial role to play in inspiring the constituents of the communities they represent and as such need to better represent the makeup of society. It is incumbent on local government, individually and collectively, to foster and enable greater levels of inclusion in its most senior ranks. No organisation can sustainably thrive and evolve without increasing the agility, skills and customer orientation of its leadership team.”