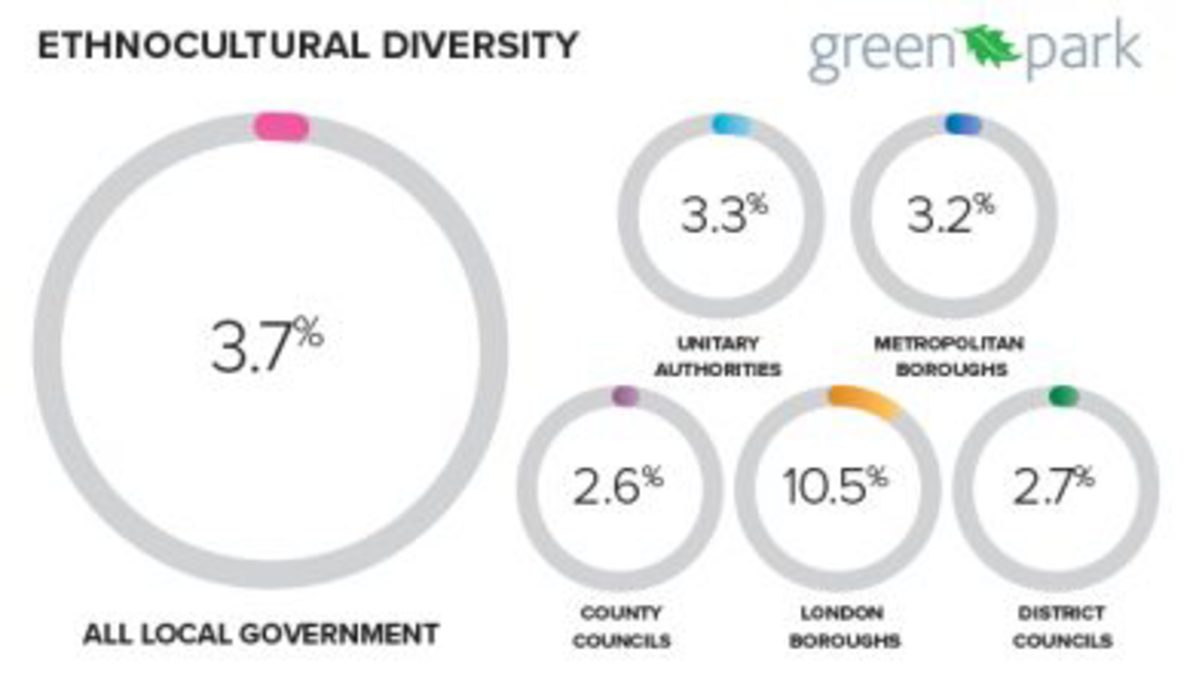 Green Park’s Local Government Leadership 2018 report reveals the failure of Local Government leadership to diversify. The report reveals Black, Asian and Minority Ethnic (BAME) CEOs represent just 3 per cent of the heads of the UK’s 418 Unitary Authorities, County Councils, District Councils, Metropolitan Boroughs and London Boroughs. This is a tiny percentage compared to the overall UK population, where demographics show 13 per cent of working age citizens are non-white. Just ten individuals holding the highest leadership position across all tiers of Local Government are from a BAME background.

Metropolitan Boroughs have a dismal record when it comes to ethnocultural diversity, with not a single ethnic minority CEO in 2017’s and 2018’s leadership analysis, despite these organisations representing some of the most diverse populations in the UK.  County Council’s also have no BAME CEOs, falling from 3.7 per cent in 2017, while District Councils have six BAME CEOs, yet this is only a representation level of just 3.3 per cent.  Despite the population of London comprising 40 per cent non-whites, only two of London’s 32 Boroughs have a BAME CEO.

Analysing the wider senior talent pool, the Top 20 management positions incorporating both the CEO and their direct reports (Chief Officers), BAME representation is still a tiny fraction compared to the overall working age population with an ethnic minority background.  Across the Top 20 senior positions, just 3.7 per cent are held by BAME leaders, which compares incredibly poorly when set against the leading private sector organisations.  In the FTSE 100 BAME representation amongst the Top 20 leaders in organisations sits at 7.1 per cent.  County Councils have the worst levels of ethnic minority representation in the upper echelons of management, with just 2.6 per cent of the Top 20 positions held by an employee with a BAME background.

At a time when public scrutiny and trust is volatile, Local Authorities have an even greater responsibility to not only to meet the demands of their communities, but also to also better reflect them from a diversity and inclusion perspective.  To build management teams that reflect the interests of the whole population they represent, Local Authorities need to ensure that they remove institutional bias in all its forms from their recruitment and leadership development processes to enable employees to reach their full potential based on merit. While some progress has been made in the past 12 months – most notably in London – little or no progress has been made in other parts of the country with some key metrics going backwards not forwards. Building a network of talented future leaders, both inside and outside the Local Authority, is vital to its future success.”