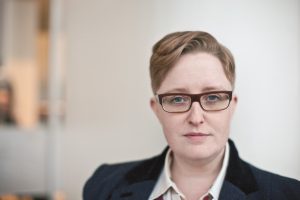 There’s often an assumption that Third Sector organisations are inherently diverse and inclusive places to work because of their mission or ethos. We know that’s not always the case though. Only four charities made it in to Stonewall’s 2018 list of the Top 100 LGBT-inclusive employers in Britain, for example (Victim Support, Touchstone, Barnardo’s, St Mungo’s). There are some genuinely committed organisations, but there is often a sense of complacency among many others.

Whilst women may be well represented across the sector as a whole, little is really known about other protected characteristics in the charity sector. From an LGBT perspective, there’s an acute lack of bi and trans visibility within Third Sector organisations, especially role models at senior tiers.

Within the current financial climate, charities are undoubtedly suffering and having to keep an even sharper eye on expenditure. Diversity may appear to be a soft target for de-prioritisation in these times. However, at Stonewall, we know that inclusive workplaces mean people can be themselves and perform their best, and inclusive employers attract and retain great talent. This benefits the employer, its service users and employees, so it’s even more crucial to focus on diversity in difficult times.

Many of the leading organisations we work with through our Diversity Champions programme now have an increasingly nuanced understanding of diversity and inclusion. Over time, and along with other sectors, the Third Sector has started to think about the distinct experiences of different groups they serve through a more intersectional approach to diversity. If charities are to comprehensively fulfil their mission, be great workplaces and stay relevant to donors and communities, they need to understand the lived experiences of all parts of the communities they serve. The experiences and challenges faced by a white, gay man in a city are going to be very different to those of a Muslim lesbian in a small town, for example.

For Stonewall, that’s meant working to ensure our staff better reflect the diversity within LGBT communities, including a strategic approach to BAME LGBT inclusion in our own team. It’s meant our programmes and work with other organisations have diversified to include focus on BAME LGBTQ communities, trans and bi communities, LGBT young people with a disability, LGBT people of faith, older LGBT people and more.

Organisations that understand this better address inequalities experienced by their service users or beneficiaries and truly drive change.

Employers need to be explicit about their commitment to diversity and inclusion and about their support for specific protected characteristics, whether that’s on a website, in a job advert or an HR policy. When people from underrepresented groups can see themselves recognised and provided for by a potential employer, it speaks volumes. Organisations need to actively encourage job applications from underrepresented groups; just saying ‘our door is open to all’ isn’t going to cut it.

Some of the best employers we work with consistently help potential employees see themselves reflected in their organisation through their outreach and comms. They openly talk about diversity networks in their organisation, how inclusive their benefits are, and showcase role models from all backgrounds and at all levels of their organisation. They reach out to communities at diversity recruitment events, on recruitment portals like our own Proud Employers website, and in reports like Starting Out, Stonewall’s annual guide to LGBT-inclusive employers.

Increasingly, employers need to understand how their potential employees think about their own sense of identity. Many young people, for example, think of gender identity and sexual orientation in a more fluid way; others have reclaimed the word ‘queer’ to describe their identity. For intergenerational workplaces, that can mean challenging conversations, but if organisations want to attract the best talent and reach underrepresented groups, they need to understand societal trends and cater for all.

Stonewall won’t be an effective organisation if we don’t have a workforce that reflects the communities we serve. We use different platforms for recruitment – in some cases, we use diversity-specific recruitment firms to ensure we reach those diverse talent pools. We’ll mix up our interview panels to ensure diverse thinking and remove any affinity bias, and we’ll ‘blind assess’ applications too. We’ll have a very visible and vocal presence at diverse community events, online and through personal and professional networks too.

Just reaching diverse talent isn’t enough though. You have to ensure your workplaces are fully inclusive if you want that talent to stay so, much as we support our Diversity Champions to do this, we focus on it too – from our own employee networks to celebrating diversity awareness days and profiling role models from different communities.

It’s too easy for organisations, charitable ones included, to deter applicants or disadvantage them through structures and processes that aren’t inclusive or which inadvertently switch people off from even considering applying for a role. Robust training, diverse recruitment panels and visible role models from all backgrounds and at all levels of an organisation are a must.

“Widening access” isn’t just about getting in to an organization; it’s also about getting on in that organisation. For an LGBT person, for example, to thrive, it’s critical to think about that employee’s lifecycle in the organisation. This starts at recruitment and moves in to induction and personal development. It extends through out their journey – from the messages they see in internal comms from senior leaders to the relationship with their manager and how that manager values the difference they bring or recognises and rewards contributions to diversity networks, for example.

All of this requires organisations to look inwards and do some honest self-reflection, collecting and analysing data wherever possible (including through promotions and exits) to better understand the journeys and lived experiences of their employees. That’s the only way to then take relevant, impactful positive action in an open and transparent way to address structural disadvantage.

Ruth Hunt is the Chief Executive of Stonewall. In three years she has overseen a 50% increase in the charity’s income and the steady growth of its structure, taking the team from 70 to 120 employees and securing Stonewall’s place as the leading lesbian, gay, bi and trans equality charity.

Ruth has redefined Stonewall’s role as a charity, from one that enables change to one that empowers others to make change happen. Under her leadership, Stonewall’s programmes and the way they are delivered, have been refined to ensure they create sustainable, powerful grassroot activism, both in the UK and abroad.

Ruth spearheaded Stonewall’s commitment to trans equality and, after careful consultation with trans communities, she created the Stonewall Trans Advisory Group. This year, after further careful consultation, A Vision For Change was launched. This five-year strategy sets out how Stonewall will help achieve legal and social equality for trans people across all areas of their lives.

Ruth has also established Stonewall as a leading voice on international LGBT equality, delivering ground-breaking international empowerment programmes in some of the world’s most hostile countries, in addition to being a major influencer on the UK Government, ensuring the UK is an informed and effective world leader for LGBT equality.